Paul Allen’s Vulcan Capital is among those raising an interested hand over a 3-year-old startup called CTRL-Labs, makers of a wristband that can pick up signals from the brain and allow users to control a digital device without moving a finger.

Vulcan tweeted a link to a New York Times DealBook post on Tuesday that said CTRL-Labs had raised $28 million in a new funding round. 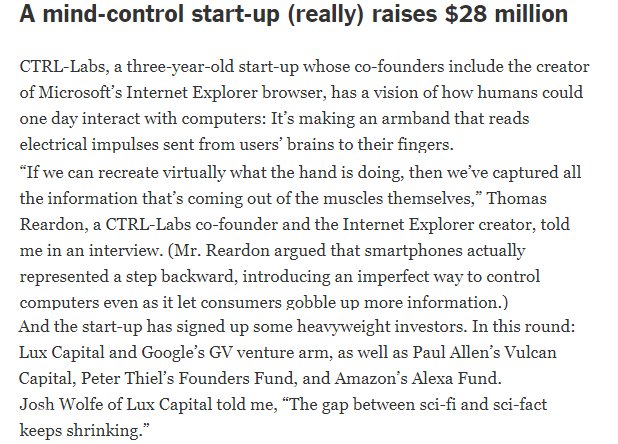 Instead of typing commands, this start-up wants reinvent the way we interact with our computers. Meet @CTRLlabsCo, the latest investment from Vulcan Capital. http://vlcn.fyi/Jtx430keYNK #VulcanCapital

According to a story in ZDNet, the non-invasive surface electromyographic (EMG) neural interface enables the capture of electrical signals created by muscles. A wristband full of sensors picks up electronic pulses and allows a user to type on an imaginary keyboard, for instance. “A user can hold their hand motionless on a desk and still be able to type text on a screen by imperceptibly triggering the nerves to the muscles in the fingers,” ZDNet wrote.

“By focusing on the wrist we don’t have to deal with trying to find those signals in the brain, which is a noisy place,” Reardon told the website. “When the signal reaches the wrist we are essentially capturing the user’s intent.”

While speech has been the obvious go-to tech of late with the rise of Amazon’s Alexa and other personal AI assistants, Reardon told ZDNet why the hand is a better idea.

“Speech is not that good of a user interface for many things. Try controlling a cursor with words,” he said.

Billionaire Tesla and SpaceX CEO Elon Musk is also interested in controlling computers with signals from the human brain, but his Neuralink venture would start with implantable interfaces and would help with certain severe brain injuries.

A CTRL-kit device and software stack will be available this year and will feature the company’s Intention Capture neural interface technology. Other investors in the round, according to the Times, were Lux Capital, Google’s GV venture arm, Peter Thiel’s Founders Fund, and Amazon’s Alexa Fund.

Here’s a video of Reardon discussing and demonstrating the technology earlier this month during a keynote at the O’Reilly Artificial Intelligence conference in New York:

There are no upcoming events at this time.